The Cabinet of Dr. Caligari

Read about the film on at Wikipedia

This DVD includes two versions. One is the edited film with Teasley’s soundtrack and the other includes Tom’s live performance of the movie underneath the original.

Critical response to the live showing is incredibly positive.
“I am pleased to report that Tom Teasley has breathed new life into The Cabinet of Dr. Caligari. Teasley's eerie score makes the film feel unpredictably alive and immerses the audience in the tale of the mad doctor and his murderous somnambulist. The live music makes the film feel like a communal experience. The audience on opening night let out gasps as the plot unfolded, a remarkable reaction to a film that is almost 100 years old. If that's not a recommendation for Teasley's work, I don't know what is.” - Hannah Landsberger - Broadway World
(Teasley) is, in a sense, another character in this film. Those who come to the movie knowing the story of Dr. Caligari won’t miss as much if they find themselves transfixed by Teasley’s performance. Others – especially those with a love of silent-era films and German Expressionism (welcome to Tinder, ladies) – who haven’t seen Dr. Caligari may want to go twice: once to experience Weine’s disturbing look at mania and murder, and again to appreciate Teasley’s seamless work. - Mike Bevel DCMetroTheatreArts

“Mr. Teasley’s original score to “The Cabinet of Dr. Caligari” was certainly a treat to experience. His setup in and of itself was impressive, with a vast array of hand percussion instruments, rattles, Native American flutes, electronic keyboards, samplers, and synthesizers. Also, it is of importance to note that all music was performed live without the aid of pre-recorded material or loopers, which aids in the realization of Teasley’s impeccable timing.

An aspect of Teasley’s performance that I thought was particularly creative was Teasley’s utilization of short, recognizable melodies to represent certain characters and thematic material within the film.” -Brittney Allen - Maryland Theatre Guide

“Tom Teasley’s live score suits it well. Using mainly a keyboard and various percussion instruments, some homemade, he shivers our spines with atmospheric creepiness. Who knew a coffee can with a steel spring through it could sound so threatening? - Jill Keil Keith DCTheatreScene 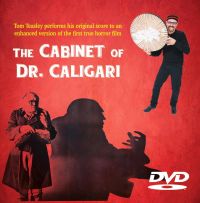 The Cabinet of Dr. Caligari

Tom performs his original score to an enhanced version of the first true horror film.